I hate Apple.  Okay, I don't wholly hate them, but I hate how otherwise simple tasks in Linux or Windows become pains in the neck on OSX.  I also hate how Apple deliberately and unabashedly devote their development and UI design to ensure that you, the consumer, are locked into the Apple ecosystem forever and ever, amen.

Case in point? Something as simple as mounting NTFS devices as read/write.  Apple should be absolutely and utterly ashamed that OSX didn't support this natively until only recently (OSX Mountain Lion), as basically any other respectable OS (Linux, BSD, Unix, Windows) could do so back in the year 2000.  How Apple made it this far without being publicly humiliated for this simple lack of functionality, I don't know.  But the good news is although its not supported via the GUI, we can now do so via a simple mount command.

First, eject the NTFS disk(s) that appear in finder by clicking the eject button next to the partition/disk: 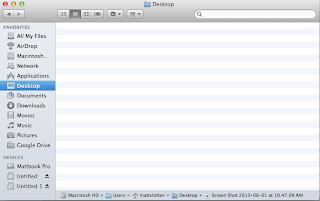 Then open a terminal windows and run the following command:

Where /dev/disk3s2 is the disk partition you're trying to mount and /media is the mount location.  I just created /media using sudo mkdir /media since this directory does not exist inherently on OSX.  Note that the force command and nobrowse commands are the key differentiators to mounting an NTFS disk in Linux. 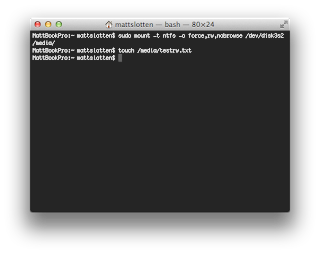 And then you're laughing.  A super simple command, but it can save hours of headache.

More to come later for OSX tips to allow you to actually use your Apple computer as a computer, and not as an Apple revenue generation machine.
Posted by Matt at 15:49